All decoration to Rendel is complete except for balconies.

​12th December 2014: The bin stores are being painted - PLEASE ADHERE TO THE NOTICES and do not enter the corridors (and your cupboards) when the signs are up as you will destroy the paintwork to the floor and risk spreading it around through the development.


25th October 2014: Max and his team have finished Rendel 7-15 this week and have done a great job so far. The building is looking so much better and brighter. The next block will start on monday.

10th October 2014: Internal decorating is under way and progressing nicely and on schedule. All the scaffolding has now been removed.

22nd September 2014: The external painting of Rendel is finished and the scaffolding is being removed completely this week.
Internal is due to commence this week. Work will start around the back of Rendel (16-26). The team again will be small, so hopefully any disruption will be kept to a minimum.
May we ask at this time, that you use the lifts as much as possible to accommodate Max and his team who will be in the stairwells each day.

Blocks will be done in rotation:
4th August 2014: The first side of Rendel is nearing completion and they are working their way around the front. Scaffolding is being removed from the back of Rendel. Sills have been repaired with resin, and the Dulux weather-shield system applied, as well as mastic around the window frames next to the brick, which should have been done originally.

7th July 2014: AT LAST!!   We have a start date for the External painting work! 14th July. A circular letter will be sent out this week informing everybody. Once we have an idea of which areas will be done and when, we will let you know.

Once Paul Philips has got things started with the external, he will be meeting Max Murphy to discuss the Internal, with a start date still being end of July/early Aug.

3rd July 2014: PAINTING IS IMMINENT! We have engaged a new Chartered Surveyor (Paul Phillips) who is speeding things along nicely and is meeting with the contractors on site this week; he is doing the necessary checking of paperwork and talking through their plans and will then sign the contracts for the go-ahead.

Our external contractors - GMA London - are ready to start, so we will see scaffolding going up very soon. Internal will likely start end of July.

As soon as we know firm dates we will send a flyer round to everyone with full details of the works.

4th June 2014: The quotes came in and after discussing all quotes and meeting those who we felt would be both the best for the job and provide value for money, we decided on the following contractors:

Both decorators who were chosen were referred by residents and came highly recommended. And being smaller companies they were deemed to be able to provide a much more dedicated, personal service, keeping the number of contractors on site to a minimum. The latter helping with security issues and concerns. We decided to use 2 different contractors so all the work could start at the same time, to get it finished sooner. Also, it spreads any risk, should it end up we are not satisfied with any individual.

The balconies and tower will be quoted for separately to save money and also allow us to fix the leaking balconies first before any painting is done there.

Figures to follow: (so far the quotes we have had are in line with the lower quote we put forward last year, but were unable to use because of not having a suitable main contractor).

29th April 2014: We have had nearly all the quotes in (just waiting for one more) and are busy doing due diligence on the companies we are hoping to use. We want to make sure we have done all we can to check them out and to make sure they fulfil the necessary criteria, so please bear with us.

11th April 2014: The Schedule of Works (SoW's) for the internal and external decoration have been sent out and the quotes should be in by the 21st April. Once we have these, then we will choose the contractors we feel are best for the job.

The internal, hopefully, can start fairly quickly - ideally May/June. As soon as we know, we will announce it.

25th October 2014: More logs have been taken away and the areas are starting to clear.


22nd September 2014: Residents will know that we recently employed a tree surveyor to assess the dangerous trees on the estate. He has made various recommendations and over the last few weeks the most dangerous trees have been attended to.

However the tree surgeons initially left a lot of the trees and logs on site which was unsightly and they are gradually taking these away as and when their truck is in the area.  Some of the larger felled trees will be left to rot down, which is good for wildlife and we hope in time the existing shrubs will eventually cover them. 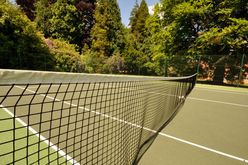 20th August 2014: The tennis courts are being repaired and re-painted today;

they will be OUT OF ACTION UNTIL MONDAY 25th.

Please note a new, temporary lock will be put on during this time.

Courts are all done.

1st July 2014: It's unlikely that we will be troubled in our development, but for those who know people in Tadworth - ex offenders have been knocking door to door selling items claiming to be on a scheme, which apparently is some sort of scam. So, just be aware... 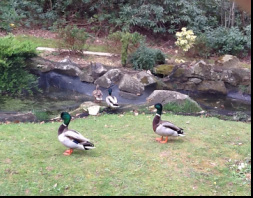 15th April 2014: No doubt most people will have seen Mr & Mrs Duck walking around the gardens.

Thanks to Erica we now have a duck house and we are hoping Mrs Duck will use this to produce some little ducklings for us.


Mrs Duck has become rather attractive this year and has had at least 4 admirers last week! 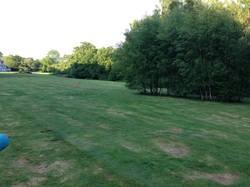 20th April 2014: The lawns have taken quite a pounding recently, what with the wet weather at the start of the year and now a month without much rain.

The main problem is that the lawns were seeded/planted over very poor earth, full of builders rubble etc. and we suspect that we will never get good lawns until extensive work is done to remove this and put down new top soil. At this stage, we do not think this is  affordable for residents.

We have therefore decided to do a trial on the Elizabeth House lawns to see whether treating them will improve things. We had considered working on the lawns outside Rendel House, but as we are expecting builders during the summer, we have postponed this for a year.

Initially you may see the lawns turning black, but this will only be for a short period and thereafter we expect to see much greener, weed and moss free lawns. 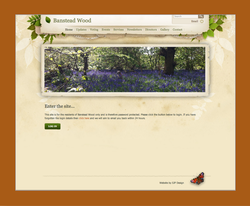 11th April 2014: As you can see, we now have a new website. Details are being added all the time.

The hope is that the new layout will be easier to navigate and to see what is going on. We will be using the site to inform everyone of the latest news, with regular updates.

Previously, we had to send off any information for a 3rd party to update it for us and emails were difficult to access. Now, with the new platform, we can update it easily and effectively ourselves.

The cost will be minimal ongoing. We were paying £2,000 pa for the old site but this one will be approx £80. A big saving!

We, of course, will still be using paper communication when appropriate, but the main point of contact will be the site. 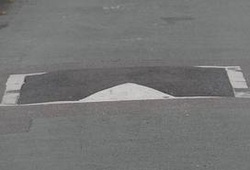 4th May 2014: The WHITE MARKINGS (bays / lines / humps) are to be done on the 14th & 15th May and we will need all cars to be removed from the bays at this time. It will be done in stages so we will let you know which areas are to be done on which day. A letter will be coming round early next week.

29th April 2014: The new humps are now done and successfully 'smooth'. The company came and did all the work (including renewing the surface near the gate where the mechanisms were being exposed) in a relatively short time, so hopefully few were inconvenienced by it all.

The WHITE MARKINGS on them will be painted very soon. They will be done at the same time as all the other white lines/numbering on the development in order to be economical.

11th April 2014: Looks like the date is going to be 28th April for replacing the humps - we will confirm.

10th April 2014: The sharp bumps are to be replaced by wider ones to match the original ones. The contractor has been selected and we are waiting for them to come back to us with a start date now the storms have passed.

The white markings will be done at the same time: While on site, the painters marking the humps will also be re-doing all the white lines and parking numbers on the entire site.

We will give 2 weeks notice with reminders pinned up 2 weeks before, 1 week before & 2 days before, just so everybody is aware. The painting will take place on a week day so hopefully the number of cars around will be minimal. Those who are parked during the day will be given advice of where to park, which is likely to be on one side of the driveway. The paint is fairly quick drying, so disruption should be kept to a short time.

As this is a communal item, the cost of this will be coming out of the £40k we were given by Lindens in the handover, so will not be added to the service charge.